I recently watched the forthcoming Lambert & Stamp documentary – which is great. I interviewed Chris Stamp in 2004, when he was promoting a new Who reissue. He was quick witted, funny and outspoken. I contacted him again when I began researching my book, but, sadly, he was unwell, and died in 2012. Here’s an extract from the book Pretend You’re In A War: The Who & The Sixties, all about the early life and times of Chris…

Christopher Thomas Stamp and his five siblings were the children of merchant seamen Tom Stamp and his wife Ethel Perrott. Their oldest son, Terence, would go on to become a film actor and writer. Their second son, Chris (photo below with Terence), was born in Plaistow, East London, on 7 July 1942. Tom spent the war years as a stoker in the merchant navy. It was a harrowing experience that Chris would refer to in interviews many years later, and which helped him identify with Pete Townshend’s notion of a generation damaged by war.

On several occasions, Tom Stamp’s merchant vessel was caught up in a skirmish and its crew forced to abandon ship. More than once, Ethel went to the shipping company’s office to collect her husband’s wages, only to be told there wasn’t any as Tom’s ship had gone down. During the Blitz, his crew received a wire informing them that London was under attack. When Tom received a second wire, he was so sure it would tell him that his wife and son had been killed in an air raid, that without opening the telegram, he tried to throw himself overboard. His shipmates restrained him while one of them read the message, telling Tom that Ethel and Terence were safe and had been evacuated to Yorkshire.

On a voyage from Ireland to Iceland, Stamp’s father’s vessel sailed into a Force 10 gale. Tom and his fellow stoker spent twelve hours shovelling coal into the ship’s boiler, while up to their waists in freezing water. The Iceland voyage would be the tipping point. By the end of the trip, Tom Stamp’s jet-black hair had apparently turned white. He was psychologically scarred, and, for a time, struggled to settle down to life in peacetime before taking a job as a tugboat man on the River Thames.

Ethel Stamp had raised Terence while his father was away at sea, and Tom focussed much of his attention on his second son, Chris. “Dad decided to bring Chris up himself, or at least to influence him as much as he could,” wrote Terence in Stamp Album, the first volume of his autobiography. Tom soon taught Chris how to fight, and, as a teenager, encouraged him to enter a school boxing championship. He made it through to the quarterfinals before being beaten. After the bout at Plaistow Town Hall, Stamp waited outside for his opponent and promptly knocked him unconscious. “Chris was a natural fighter,” wrote his brother, “but a street fighter.”

Chris Stamp left Plaistow Grammar School in 1958. Together with a group of friends, he bought a Daimler Hearse in which they rode around East End dancehalls offering to quell any trouble in exchange for free entry. One of the gang was fellow ex-Plaistow Grammar schoolboy Bill Curbishley (who would, much late, succeed Stamp and Lambert as the Who’s manager.) According to Terence Stamp, the gang’s activities eventually attracted the attention of East London’s notorious criminal twins, Ronnie and Reggie Kray “who were always on the lookout for likely young lads.”

In 1960, Ethel Stamp told Terence she was worried about Chris’ involvement with the gang and urged him to intervene. Terence had moved out of the East End to a flat in Harley Street and was trying to break into acting. He summoned his brother to the flat where Chris begrudgingly told him that the only thing he was interested in was girls. Terence loaned Chris his theatre employee’s union card enabling his brother to get a backstage job at Sadler’s Wells Theatre: “Two months later he rings up from Glasgow, and says, ‘I’ve just shagged all of the corps de ballet. The last one’s here – she wants to say hello’.” Despite the perks of the Sadler’s Wells job, it was only when Chris was hired as a prop man on the West End production of Leonard Bernstein’s musical West Side Story that he realised he’d found his ideal career. “It changed his life,” said Terence. “From that moment on he knew he wanted to be in showbusiness.”

Like Kit Lambert, Stamp had a steely charm and fearlessness that enabled him to talk his way into jobs without having the necessary experience. A year later, Lionel Bart, the songwriter behind the West End hits Fings Ain’t Wot They Used T’Be (1960) and Oliver! (1960), met Chris backstage and was instantly besotted. Terence assured Bart that his brother was heterosexual, but agreed to arrange a meeting. Chris met with the songwriter who promptly hired him to run his publishing company.

Stamp had gained another foothold in showbusiness, but the hand-to-mouth nature of the industry was evident in his living conditions. The writer Christine Day (née Bowler) met Chris in 1962 when he shared a flat with her brother, Clive Colin Bowler, an actor who’d appeared with Terence Stamp in the TV drama Term Of Trial (photo below). Stamp, with his jeans, leather jacket and gruff East End accent made quite an impression at the Bowler family home in Wembley.

“Chris and my brother’s fortunes seemed to fluctuate,” says Christine now. “For a time they rented a room in Ladbroke Grove, when Ladbroke Grove was an absolute no-go area. My mother sent me down there with a bag of groceries because they had no money at all. I think there was this thing in the sixties of wanting to dabble in an authentic lifestyle rather than thinking you were actually down and out.”

Not that this penury impacted on their social life. One evening, Christine, joined the pair on a trip to gatecrash a party in West London. The partygoers set off in Clive’s newly acquired second-hand Jaguar, the bonnet of which was secured with a length of rope but floated off as they crossed Hammersmith Bridge. Once at the party, Stamp emptied the contents of the host’s well-stocked fridge into the boot of the car.

Nevertheless, their fortunes changed soon enough, when the pair moved into a chic penthouse flat at 23 Cadogan Gardens, near Sloane Square. This new residence soon became a magnet for Chelsea’s beautiful people, with models, actors, photographers, gamblers and debutantes regularly passing through. Mim Scala, a young film agent, shared the flat with Stamp and Bowler, and wrote about it in his 2012 memoir, Diary Of A Teddy Boy: “The most desirable girls in the world traipsed through these portals on a daily basis.”

Mim Scala, whose parents ran an ice cream parlour in Fulham, also observed a crumbling of social barriers: “For the first time since the days of the Regency Bucks the riff-raff and the aristocracy mingled freely. Etonians acquired strange cockney accents, and cockneys started speaking posh. It had become completely credible for well-bred young girls to have naughty King’s Road boyfriends.” Among the regular visitors to Cadogan Gardens was John Fenton, who would go on to work with Lambert and Stamp, and would soon become involved in a lucrative deal to sell Beatles merchandise. “We were hanging around the Kings Road Chelsea set, doing three or four parties a night,” says Fenton now. “Forget La Dolce Vita. Our lifestyle was twenty-four-seven. I liked Chris Stamp because, like me, he came from a serious working-class background.”

At Cadogan Gardens, Christine Day witnessed her brother and Stamp’s mod-like attention to detail, when Clive came padding down the stairs in wet jeans he’d been shrinking to fit in the bath: “They were both absolutely obsessed with getting the perfect shape on their jeans.” This obsession led to Terence Stamp, now a star after his lead role in the naval drama Billy Budd (1962), treating his brother and Clive to a stay at Hampshire’s Forest Mere Health Farm: “Terry paid for it, so that the pair of them could eat fruit and get really fit and healthy, and look great in their clothes.”

According to his older brother, by the time Chris Stamp worked on The L-Shaped Room, he was subsisting on a diet of apples in an attempt to shift some extra weight and impress Leslie Caron. In the end, though, it was Kit Lambert’s eye that he caught. “It never surprised me that those two got together,” says Lambert’s friend, Robert Fearnley-Whittingstall. “It may have seemed like an implausible partnership, but only superficially. It was a meeting of minds. They both wanted to make money, and nothing binds people together closer than that.”

Read more in: Pretend You’re In A War: The Who & The Sixties. 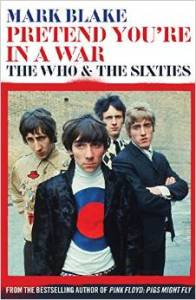