When you write a book about events that happened more than fifty years ago, you quickly discover that memories fade and no two people will ever agree on anything. It’s commonly believed that Keith Moon auditioned for The Who during one of the band’s gigs at The Oldfield pub in Greenford, West London in spring 1964. That’s the way Moon told it, and the way the band still tell it. However, in Tony Fletcher’s Keith Moon biography, Dear Boy, the pub’s former doorman was adamant that the public audition never happened.
What’s never been in dispute is that prior to Moon joining The Who, the band were playing gigs with temporary session musician Dave Golding (sometimes referred to in books as ‘Dave Gold’). The only thing to do, then, was to track down Dave Golding, and ask him. Here’s my interview with Dave, from September 2013, some of which was used in Pretend You’re In A War: The Who And The Sixties.

Let’s recap then: you played drums with The Who for a few weeks around spring 1964. You took over from Doug Sandom, but it was only ever a temporary post.

Yes. Somebody wrote that big thick book about Keith Moon [Dear Boy] and the guy reckoned [the audition at The Oldfield] never happened. I keep meaning to get in touch with him and tell him it did. I am still playing and rehearsing. I’m 76 now, and in a band with older guys who are younger than me [laughing], and some of them have mentioned that book to me. So it would be good to put the record straight. The Keith Moon thing happened. I can remember the night.

Firstly, what was your musical background before sitting in with The Who.

I’d done sessions for [producer] Joe Meek in a group called The Blue Men [in the late 50s]. By 1963 I had my own band The Flintstones, a seven-piece band that Jim Marshall’s son, Terry, played in, and we went to Germany, like The Beatles and Gerry And The Pacemakers. We were not in the Star Club but around the corner, sharing a bill with The Barron Knights [laughing] We did a month and it all went very successful. We were working musicians, we weren’t looking to be pop stars. It was another attitude then. There was a lot of music around, nobody was looking for fame and fortune, or as far as I know they weren’t.

Had you seen The Detours/The Who around at much at the time?

We all knew each other. We were all running around town, all working, all the time, playing the ballrooms, the Mecca, the Top Rank – all the pubs had bands in. At the time I was playing all sorts of music. I’d played with Pete Townshend’s dad Cliff’s big band [The Squadronaires]. I depped when Cliff’s drummer wasn’t able to play. All the groups used to meet at The Wimpy Bar in west Ealing any time after 10:30 at night – all musicians, Cliff Bennett And The Rabble Rousers, The Who, everyone. It was all musicians’ chat – who’s playing where, who’s left which band, that’s how it developed.

How did you end up playing in The Who?

I got married in ‘63 and went away to Hamburg and my new wife was not too happy. So when I came back from Germany I was going to pack it all in. I piled my drum kit into Jim Marshall’s shop [in Ealing] so he could sell it for me. The thing is Jim was not keen on me packing up. I had had drum lessons from Jim in the past. He wanted me to keep playing.

So was it Jim Marshall that put your name forward for The Who?

Yes. Because out of the blue I got a phone call from Jim saying ‘I can’t stand this drum kit being in my shop, take it out, you got a gig with Cliff’s boy, Pete’s group.’ It was in Brighton at the Aquarium [The Scene club, 18 April 1964, flyer below].

I said, ‘Yeah, OK’. So I took my then wife out for a day in Brighton and then played the gig in the evening. That was the first one, as far as I can remember. But out of that gig came several more. We did The Goldhawk, but there was another club in Shepherd’s Bush we played as well. Once I started playing with The Who, my wife knitted me this big, loose jumper. It was sort of beatnik-y and loose, like something a beatnik would wear. I called it my ‘R&B jumper’ (Laughing).

They were still a covers band. We did Shadows numbers and whatever the pop hits were of the day. Entwistle still used to take this French horn with him to the gigs, so sometimes they’d even do a few numbers that used brass. Pete was doing that windmill thing with his arm. I remember he was already doing that (laughing). But I was always aware I was a dep. There was no talk even from my point of view of joining the band.

What do you remember about the night of Moon’s audition (believed to be on 30 April 1964)?

I turned up at the Oldfield (see below) and couldn’t believe what I saw on stage. Pete Townshend had these new Marshall cabs stacked up on stage as far as the ceiling. It was as loud as you could possibly get. But he hadn’t told me about this. So that night, I turned up at for gig, and it was as if the whole idea of what The Who was about had changed. Whether Keith Moon had timed it to turn up that night, I don’t know. Anyway, I’m playing away but it was so bloody loud… I liked playing with them, but I thought it was too loud, and all I wanted to do was get off and go round the long bar at the back of the pub and have a drink. Which is what I did as soon as we took an interval.
In the meantime a guy had come up to Pete and asked if Keith Moon could play. I wasn’t aware of what going on, and I didn’t mind, I just had the feeling someone was asking on Moonie’s behalf. So in the interval I went to the bar to get away from it all. 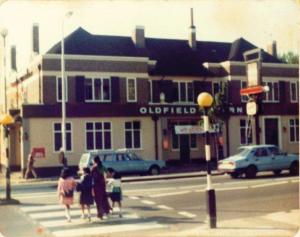 The story goes that Moon played Bo Diddley’s Road Runner and was so ferocious he broke your drum kit. What do you remember?

I was having a drink, Moonie was playing. Then suddenly I hear over the Tannoy ‘Is Dave Golding around, can he come up to the ballroom please?’ I went round the corner and Moonie was still playing away but he’d broken the bass pedal. Could have happened to anybody. I clambered underneath and fixed it. That was all that happened. I didn’t mind him playing at all.

What did you think of his playing?

It was erratic and mad. I thought Bloody hell, what this? Enthusiastic, certainly. He did a couple of numbers. I watched, but thought it was all very new, but it wasn’t good. I’ve got to say. It was very erratic.
At the end of the night we were packing up, and Pete Townshend said, ‘We’ve got a chance of a recording thing?” [widely believed to be a demo session for Fontana] Could I do the recording? I said, ‘If you’re looking for someone, what’s wrong with the guy you’ve just got?’ He said, ‘Ohhh. He’s a bit this… a bit that.’ I said I am not keen on joining the band if this is the band you’re going to be. Let him do it.’ He said, ‘OK we’ll try it.’ I was older anyway.

I left them to it and an opportunity came up for a job as manager at Drum City [a music shop in London, in which, coincidentally Keith Moon had met the drummer he replaced in his very first group The Escorts] for seven years. I carried on playing drums. I’d played with orchestras and I could read [music], so I started to do a lot of sessions. I was working and doing all sorts of things – all the American musicians were coming in to the shop.

No. I was only ever a dep. I and others like [world-famous session drummer] Clem Cattini were just guys in and around the London music scene. But we were all just working musicians. Out of nothing legends have been built.

Dave Golding is interviewed in the forthcoming Joe Meek documentary, ‘A Life In The Death Of Joe Meek‘